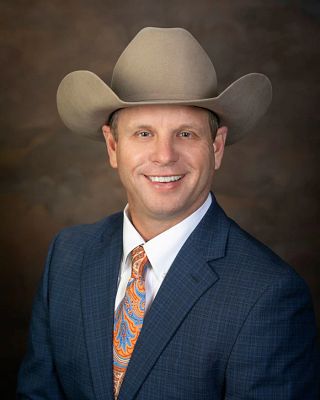 Clay Burtrum is a commercial cow/calf producer from Stillwater, Oklahoma. Upon graduation from Oklahoma State University with an Animal Science Biotechnology degree, Burtrum accepted a job with Continental Grain (now Five Rivers) as a management trainee. After three years, he was promoted to cattle manager where his responsibilities included the management of the cattle department, a role he continued for another three years.

In 2000, he moved back to Stillwater to work for Farm Data Services (FDS). FDS is an agriculture accounting firm that specializes in managerial accounting, appraisals and crop insurance for farmers, ranchers, feedlots and rural businesses.

Additionally, Clay and his father formed Burtrum Cattle LLC, a family operation that now includes Burtrum’s father, Clay and Clay’s three daughters. In 2008, they added a commercial cow-calf operation. With their unique location near Oklahoma State University, they utilize college students to help their ranch manager in the day-to-day operation.

Burtrum has held many leadership roles including  serving on the Oklahoma Beef Council (Chair, 2013-2015), District Director for the Oklahoma Cattlemen’s Association, member of the Beef Promotion Operating Committee, leader of both the national Checkoff Nutrition & Health and Checkoff Safety committee,; NCBA Region IV Federation Vice President, and member of NCBA’s Finance and Audit Committee. Burtrum was also a member of the first class of the King Ranch Institute for Ranch Management Excellence in Agriculture Leadership Program and has been the chairman of the Payne County Farm Service Agency twice.

...because this organization is determined to preserve this way of life that we have all grown to love."