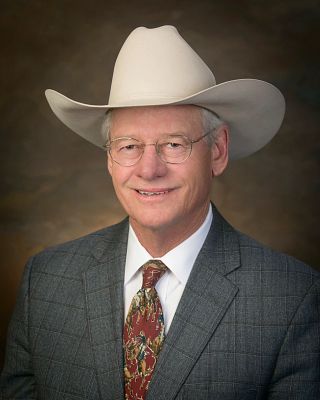 Joe Guild is a fourth generation Nevadan with roots dating back to the late 1850s. He is a third generation Nevada lawyer, licensed to practice in Nevada and California. He and his partner own Great Basin Resource Advocates, a full service ranch management consulting firm. They currently operate a cow- calf ranch for a family trust located on private and U.S. Forest Service land in Douglas County, Nevada, and Alpine County, California. They also run a small herd of their own cattle on this ranch. He is a member of the management team of a cattle, sheep and dairy hay ranch in eastern Nevada which operates on private and public lands. He has managed ranches and represented ranch interests for more than 40 years.

Guild is a past president of the Nevada Cattlemen’s Association and was named Cattleman of the Year in 2001. He is a past chair of the NCBA Tax and Credit and Public Lands Committees. He is the past NCBA Region VI vice president. He has served on numerous NCBA task forces over the years. He is also the past president of the Nevada Agricultural Foundation. He is an alumnus of the University of Nevada Reno and is a member of the College of Agriculture, Biotechnology and Natural Resources advisory committee.

He is a U.S. Army veteran of the Vietnam War; First Lieutenant with an Honorable Discharge. Guild and his wife, Catherine, have five children and seven grandchildren.

"As individuals, we have limited resources...

...to aid in keeping the "wolves" such as government, environmental and radical groups, off of our door steps. NCBA is there every day protecting our industry."